Memories of The 2011 IAABC Conference 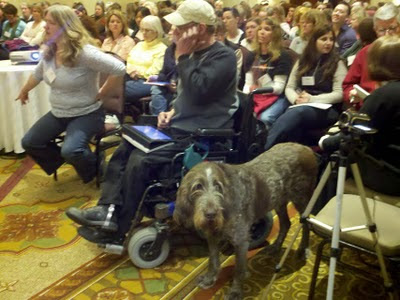 Several weeks ago I got a surprising e-mail from Katenna Jones asking if I'd like to attend the IAABC (International Association of Animal Behavior Consultants) conference on the bubble in exchange for working the conference as a volunteer. I'd wanted very much to go but was still reeling from last spring's vet bills. Katenna was giving a presentation on animal stress research and was allowed to invite three friends to join the corps of volunteers. I happily accepted. The conference was this past weekend and well, I owe Ms. Jones a solid, maybe six or seven, I'll have to get a head count of all the amazing speakers, (Katenna was one of them) to be sure. She'd also invited Connie Buldoc from Providence Animal Rescue League, a remarkably kind hearted and needlessly self effacing energizer bunny and the keystone of the volunteer effort and Joyce Gauthier who I'd first met several years ago at a Kathy Sdao seminar and again at symposium held at Brown University. Joyce is a gifted and extremely smart trainer who I got to swap notes, anecdotes and ideas with throughout the conference. Both contributed to an amazing weekend that I'll be thinking, reading and talking about for years to come. While I'm still digesting everything I saw, read and heard I'll share some of the highlights while they're still fresh in my completely blown mind. Here it goes.

The volunteer effort began this past Thursday night stuffing conference bags and organizing name tags. It'd been an exhausting day that started at 3AM and ended with me whining about organizing the name tags. Right away I met Lily, a college student who'd clicker trained a crab to ring a bell with mussel meat (later gaining the attention of the esteemed Karen Pryor) and her friend Nikolai, a 17 year old immigrant from Moscow studying chemistry at Tufts, yup, I was the dumb guy in the room again and I'd only been there five minutes. Lily and Nikolai were modest, deferential and mature beyond their years. I've had decades to forget how relatively not like these two I was when I was their age. How's that cloning business coming along guys? We could use more young people like these two. I copped to having used a digital projector a few time and just like that I was handling audio/visual for several of the speakers, making sure they were seeing the same images on the big screen and their respective laptops. That started in earnest Friday morning with Dr. Nick Dodman, a pioneer in the field of veterinary behavior at Tufts University. I managed to get a laugh from him before he got things off the ground with his presentation on compulsive behavior, in the process expanding my vocabulary to include words like “stereotypie”, disorders like Acral Lick Dermatitis and phrases like “flank sucking”. That segued nicely to the first of two presentations by Dr. Frank McMillan of Best Friends Animal Society who shed light on the affects of animal abuse including truly horrific practices like bile farming, click HERE to help and learn more and the plight of the Spanish Galgo click HERE for more information and to help that rescue organization. I came away from Dr. McMillan's presentation feeling fairly Pollyann-ish. This was disturbing stuff not strictly in relative terms, I appreciate that a good deal of the rest of the world does not share the same kind of relationship with dogs Americans do. Nikolai explained to me that children in Moscow are taught to fear dogs in fact and that he was still acclimating to life here where dog ownership is comparatively common. This was disturbing on basic human terms. The complete absence of empathy exposed in Dr. McMillan's piece was on a measure previously unimaginable to me. Thankfully, a break followed and the first opportunity to start talking to Connie, Joyce etc. about what we'd experienced so far. I'm still taken aback by the restrained egos, the sense of community, there were rock stars in attendance without the rock star bowl of green M&Ms and pitted apricots. Even early on the conference was proving what my friend Darcy would call “juicy”. However, nothing could have prepared me for the next presentation. It was the “Inception” experience of the conference, that small totem still spinning in my brain for hours afterward. Dr. Myra Milani's “Where the Sun Don't Shine”. You should probably sit for this one.

Before I give you my impression of Dr. Milani's presentation I should say that, like Inception, I should probably see it a few more times, there's a good chance I missed what she was driving at, I ordered the audio and may revise this post accordingly. Alright, there's my disclaimer, now, everybody someplace cozy? This presentation looked unblinkingly at Zoophilia, defined as either consensual or non-consensual sexual intercourse between a human and non-human animal. I'll give myself credit for not giving into a sophomoric giggle reflex, (used to come in handy in life drawing years ago) What Dr. Milani postulated was that climatic changes are assumed in part responsible for the increase in documented cases of animal hybridization (e.g. The widely covered case of a grizzly/polar bear hybrid killed by a hunter in Northern Canada) and that there may be a corollary with documented cases of Zoophelia. Furthermore, that as climate changes unfold we should expect an increase in these documented cases. That's right, Zoophelia may in fact be a form of hybridization. This was not your grand daddy's conference folks. I was in dog nerd heaven. All of the ickyness of bestiality aside, is there, at the core, a biological impulse to procreate with animals of another species, even if the odds of yielding successful offspring was infinitesimal? Forget labradoodles, we're talking labrapeople, hippopotahumans. Moving on,...

Next up for me was probably the most amusing presentation of the conference, Ken McCort's piece on intentional thinking which started with an idea posed by Tufts University philosophy professor Daniel Dennett, in his book “The Intentional Stance” that we humans are only capable of six levels of intentional thinking. Funny right? It was in the hands of Ken McCort who spends some of his time chumming around with Ray Coppinger (author of the “Dogs” a terrific book on the subject of canine ethology and human canine relationships) as well as wolves, coyotes and foxes at Wolf Park in Battle Ground, IN. Ken McCort is who I want to be when I grow up. With respect to intentional thinking, he believed the rules of parsimony provided dogs, cats etc. with no more than two levels of intentional thinking. Attendees challenged him with some terrific anecdotes and you had to be there to appreciate how funny it all was but it was a concept that came up again and again throughout the conference.

Of course the big draw for many conference goers was Victoria Stillwell. Oddly, I've never seen her very popular “It's Me or the Dog” show on Animal Planet so I wasn't star struck when she sat down next to me. Her presentation drew some of the most enthusiastic applause when in a segment from her show she was seen bringing a client keen on breeding his American Bull Terrier to the Fulton County Animal Shelter to see first hand, kennel after kennel of homeless bully breed dogs, the euthanasia log and finally the shelter freezer wreaking from recently euthanized dogs. It was a powerful and potent message delivered with a great deal more effectiveness than any attempt I'd made to get across the importance of spay/neuter to would be hobby breeders. It was the most polished presentation of the conference.

Next up was Dr. Sheila Arpino who's work with food aggressive dogs was a model of the patience, smarts and thoughtfulness that goes into a good counter conditioning protocol. Steve Dale followed with his excellent presentation on animal enrichment. I left that with renewed appreciation for food puzzles, it also occurred to me that moving the bird feeders away from our front windows was a bad idea. That's high definition tv for my three dogs. They're getting moved back, nose prints on the glass be damned!

One of the more shocking revelations of the conference came when Marilyn Krieger announced Katenna Jones; I'm paraphrasing but it went something like, “Animal behaviorist, educator with American Humane with a Masters Degree from Brown University, Katenna Jones lives at home with her cats, two husbands and her dog...” Who knew? No gay marriage to date in Rhode Island but polygamy is apparently alive and well. Amidst the many useful bits of information on research into animal stress was the revelation that an unsheathed penis was a sign of stress for male dogs. Over the years I'd witnessed countless “pink lipsticks” as they're often referred to; little did I know that something other than the prurient interests of the dog was at play.

Bob Bailey, a chemist/zoologist (are you reading this Nikolai?) for over fifty years and a pioneer in operant conditioning in animal training proudly proclaimed no less than six times by my reckoning, “I am not a clicker trainer” so frequent were these proclamations that I suggested to Joyce and Connie that they “click” every time he said it or that it might make a neat drinking game. “This was done without a clicker!”,...click!, gulp! Sure Bailey was poking fun at the throngs of clicker trainers in attendance but amongst his many achievements he retains a more comprehensive grasp of the history of animal training I've ever witnessed. This is one smart guy and while he took time to applaud the work of luminaries in the clicker training arena like Karen Pryor, what I think he really wanted was to share his unique perspective on the subject. He made the last presentation of the conference, shortly after I hit the Dogwise table to see if they had copies of his “Quiet like the Chipmunk” DVD. Bob walked up behind me put his hand on my shoulder and said, “I hear that's a good one, would you like me to autograph it for you?” I hadn't even purchased it yet and he'd used his Jedi skills to seal the deal. Bastard!

Finally, a presentation that had the biggest impact on me. Brenda Aloff's “Negative Reinforcement Is Not an Evil Phrase”. I couldn't wait to see what this was about. Hardly an attempt to swim against the tide, this was more about things like body language, using high and low arousal and tension to shape behaviors. Admittedly this was not a revelation but an affirmation by one of the brightest minds in the business that I've been on the right track and was developing important instincts. I know next to nothing about horses but the what I saw there was truly impressive.

What an amazing, mind blowing experience this weekend's been. Today I had to come back down to earth but I come back with renewed vigor and inspiration to last until next years conference. Finally, in a generous show of thanks, volunteers were awarded with a membership in the IAABC. To Katenna Jones, Jaimie Whittaker and Marjie Alonso (I hope you found your Macbook) I'm extremely grateful.

Posted by Great Dog Blogger at 6:17 PM No comments: