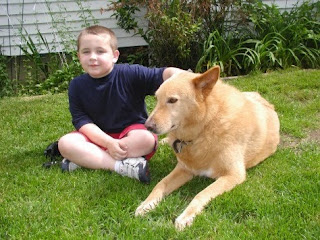 Today I held my dear friend Reno, with my head to his chest, and listened as he drew his last breath, as his mighty heart thumped it's last beat. It is powerful, to be with someone you love with all your heart and feel them slip away. Within two weeks of learning what had happened to Archie, a mass on Reno's foot that started looking like a harmless bug bite had grew exponentially. Tests revealed that mast cells, normally a component of a healthy immune system, had become cancerous. Sue and I were referred to the New England Veterinary Oncology Group in nearby Massachusetts. Chemotherapy began in earnest a month ago. Two weeks later we learned it was ineffective and the treatment was altered. His appetite slipped almost immediately, then, this past Saturday morning at about 2:30AM, we heard him wandering restlessly around the bedroom. I turned the light on to find that his tumor had begun to hemorrhage terribly. Sue and I worked together to change the dressing, control the bleeding and clean things up. The next morning we got him to his vet, Dr. Patricia Ader. She and her staff worked throughout the weekend to stabilize him. It was possible the chemotherapy was doing what it was supposed to, killing the tumor, we became hopeful, optimistic; it’s always darkest before the dawn.

Emotions are hard to keep in check when your dog is facing a life threatening illness. Our dogs are members of our family, but while euthanasia remains at best controversial with respect to humans, it is all too often the last act of kindness available to pet owners. Quality of life, cost of care, prognosis, all factor in when making decisions on behalf of our dogs. We had our eight year old son Keir to think about as well. How would he deal with the loss should it come?

Sunday afternoon I called my good friend Ann Corvin for some perspective. She’s been there from the start with sage advise and great perspective, I feel very fortunate to count her amongst my friends.

It was nearly eight years ago that I walked into the Warwick Animal Shelter for the first time as a volunteer. Ann was the shelter keeper, now the director. I was going to hone my skills as a trainer working with shelter dogs. Who was going to be my first dog? Reno was amongst the first dogs I considered; peering into his kennel he stared back at me with a look that said, “You might want to skip me buddy” I chose a fairly harmless looking beagle mix named “Snoopy”,…Snoopy promptly bit be on my forearm. I had a lot to learn. When I mustered the fortitude to work with Reno, I was immediately impressed with his intelligence. How did this dog end up at the pound? I knew nothing. Dogs like Reno are so often misunderstood. He was a stray, most likely allowed to simply walk away. Maybe he’d growled at another dog, perhaps the other family dog. We’ll never know. No one had ever come in to claim him. His first experience with humans was to be let down. For the first few months I worked with Reno frequently, teaching him some basic commands, modifying his aggression towards other dogs. I thought, this is a beautiful dog. If the right person sees me working with him he’ll get snapped up in no time. The months passed; he’d been there for nearly a year. Reno was so strong but life at the shelter was taking it’s toll on him and no one was showing interest.

I talked to Sue about him. Keir was only eight months old, Louie and Archie were two small to be a match should he turn his aggression on them. It wasn’t the smart thing to do, but Sue knew it was only a matter of time before I brought home a dog from the shelter. After an introduction on neutral ground went without incident or concern, we brought Reno home. There’s so much I could say about him, he found his way into our family so quickly, there was no looking back. It’s been an inspiring adventure ever since.

Reno has been a prince. Good to his core and intelligent beyond measure. I feel remarkably fortunate to have known him. Like Archie, he’s taught me so much. He’s been mischievous, funny, courageous and a great, great friend. Some of you will remember him as the dog I’d bring to lessons to gauge your efforts at modifying issues of aggression. In that light he was a teacher. At once an example of what is possible and an inspiration to dog owners to do the hard work necessary to curb aggressive behavior.

At 1PM this afternoon, on the advice of Dr. Ader, he was transferred to Ocean State Veterinary for a transfusion. He’d lost so much blood to hemorrhaging, however, the vets there felt the tissue damage to his forepaw was too great. The likelihood that there was enough healthy tissue their to make it through the gauntlet of chemotherapy, surgery and radiation was poor and so to was any hope for quality of life.

A strange thing happened as Dr. McAllister came into the exam room to discuss Reno’s prognosis. Time slowed; amidst the various and likely scenarios that included words like “sepsis” and “necrotic” and “amputation” I heard what Ann had said to me the day before. That there were no right answers. I’d been relying on the expertise of a team of vets in two states, and despite their efforts, my friend was suffering,…needlessly. I also recalled a conversation I’d had with my friend Ron who only months ago had been faced with the same decision for his wonderful dog Kaiser. That the decision is ultimately easy when you know your friend’s suffering has gone on too long. I was ready to let Reno go. It was up to me and to Sue to decide that he’d had enough. So I said it, I interrupted Dr. McAllister to tell her I thought it was time to let him go.

Sue was waiting outside with Keir. She walked towards me, she knew. We agreed she'd go inside to say goodbye while I talked to Keir about what was going to happen. It was hard for him, he was angry and terribly sad. Sue returned 10 minutes later, we hugged and I went in to be with my friend one last time. The staff there gave me time to be alone with him. I don't know how aware he was of what was to come. I told him that I loved him, I'd remember him forever, that I was honored to have him as a friend. He rested his head against me giving me one last lick. The vet came in, and, assured we'd had enough time, began the injection. Reno slipped away while I held him. I'll never forget him. Keir's still angry and confused. I wish I could make it easier for him.

Life sometimes manifests itself in unique and wonderful ways. Carl Sagan remarked once that life was the Universe's way of knowing itself. I like that idea. It rings true. The next several days are going to be hard. I want the Universe to give Reno back to us as he was nearly eight years ago. Beyond that, grief will give way to gratitude for the great time we had together. I don't know what happens after this, our life here on earth. Wherever Reno is, his family loved him enough to let him go.

I want to thank all my friends and family who called to check in on Archie and Reno. In particular I'm grateful to Ann and Ron for their insight.
Posted by Great Dog Blogger at 8:17 PM 1 comment: