To Err is Canine 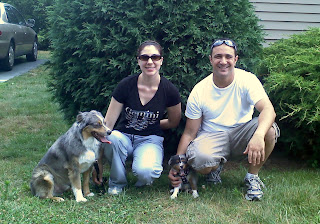 Ten years ago I was hearing about positive reinforcement training for the first time and I have to admit that it struck me as well intentioned hubris. Correcting at the end of a leash connected to a choke chain was standard operating procedure for me and many other trainers. When I first saw my friend and fellow trainer Ron sporting a bait bag, he might just as well walked into the room dressed in bunny pajamas made by his auntie. It seemed very silly. I've learned quite a bit since then, perhaps most important of all is that there's so much still left to learn. New and intriguing ideas are emerging all the time; that keeps me on my toes and forever humble. Yesterday I worked with a young bright, Mini Aussie, "Hef". It was his 'Down/Stay' lesson, the goal for the lesson was for Hef to go to 'place', a designated spot away from the door when he heard the door bell and sit/stay. Next, he was to respond to a hand signal for 'down' from the door, stay in down while his owners took turns opening the door. The idea of establishing goals is very important. Goals give relevance to the training effort. I'm training for down/stay because I don't want my dog at the door when someone rings the bell. Goals can open a broader dialogue with dog owners about the science of training, training theory, subjectivity, etc. In this case, Hef progressed so quickly, we were able to push our established goal to emphasize going to place without excessive barking, something Hef was prone to. There are a lot of reasons why dogs bark. Experienced handlers can differentiate between a bark that's intended to communicate "go away" from one that says "Come in! Come in! Come in!". Hef's was the prior. While not unfriendly, the doorbell and what it was predictive of, was a source of stress for him. In other words the doorbell made him upset. In these cases, a quiet go to place and stay is as much about bring an end to the commotion as it is about teaching your dog to reevaluate an scenario so that it's predictive of something positive. Doorbells no longer make me upset, they make rewards happen but only when I go to place, stay, respond to a 'down' instruction and let my humans open the door. The question now was whether Hef could do the problem solving necessary to realize it was his barking that was getting in the way of getting a reward for doing the aforementioned. It's in this paradigm that positive reinforcement is so intriguing. If the reward is compelling enough, taking it out of the equation gives pause to reevaluate. Hef was asking himself "What did I do to screw that up?". If he's going to change the paradigm to one that makes the reward come back into the picture, he's got to figure out the answer to that question. It didn't take long, and while it remains a work in progress, watching Hef problem solve and be rewarded for arriving at the right conclusion is simply put, the reason I like doing this so much. Life is in part about learning from our mistakes and it seems that idea is not limited to we humans. to err is canine as well.
Posted by Great Dog Blogger at 5:46 AM No comments:

For more than a year my family has grown accustomed to frequent, often weekly trips to our local vet as well as the emergency veterinary hospital and the veterinary oncology center in Massachusetts; the reasons for which have been chronicled in my last last two posts. It's been a painful process, affecting all of us in various ways. It's also been an education; throughout the process Sue diligently researched the symptoms and changing diagnosis of both Reno and Archie as well as the treatments they'd been prescribed. Several times throughout this time period we would talk to our now eight year old son Keir about what it meant to struggle with life threatening illness, about death. We worked in tandem and in earnest not to dumb it down or make light of it. That what lied after death was a mystery. These conversations, sometimes initiated by Keir, sometimes by us, were very emotional, often ending in tears and lots of hugs. During difficult times in my life I've turned to a personal journal, like many people, getting things on paper was cathartic, healing. It turns out that Keir found comfort in writing and drawing much the same way I did; writing a poem, a short story as well as drawing captioned pictures of Reno. This past week he's talked about Reno less. There are no hard fast time lines for grieving that I'm aware of but I was growing anxious that he had not found closure the way we'd hoped he would more than two weeks following Reno's passing. Some of you know that in the midst of this ordeal, Sue and I had agreed to foster "Smiley", a wired haired refugee from the flooded Warwick Shelter, for two weeks. "Our cups Run'th Over". I still haven't digested the irony of having Smiley under our roof at the same time we would lose Reno to cancer. We'd never fostered before. With a small home and three dogs we weren't the ideal candidates, but with the shelter decimated by the flood, the need was there. As it turned out, Smiley's presence had little to no impact on us or the dogs. A high strung terrier (is there any other kind) we were concerned there would be additional stress on our dogs. By cordoning them off to different parts of the house, scheduling time out to play, go for walks, etc. it all worked out.

It wasn't long after Reno slipped away that the thought occurred to me that we should consider adopting Smiley. Things had changed so dramatically at home with the loss of Reno, I worried that while Sue and I had made it clear to Keir that Smiley was only with us for two weeks; Keir had grown attached to him, that he had made it somewhat easier for Keir to cope with Reno's loss. Would handing him off re-open some wounds? 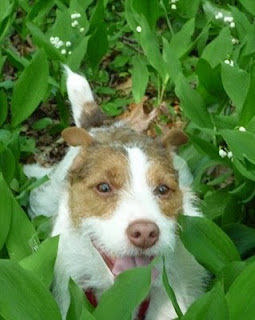 I was working with Smiley to curb his aggression issues which include resource guarding and dog/dog aggression. He'd responded in dramatic fashion to a counter conditioning approach developed by Karen Pryor and Dr. Jesus Ruiz which involves (I'll summarize this to the best of my ability) the provocation of calming signals over aggressive overtures. Still, I knew that with me typically in lessons, Sue would bare the lion's share of the additional work, shuffling the dogs back and forth, walking, feeding etc. If this was to be a viable choice, Sue would have to make the suggestion not me. It wouldn't take long. Sue, never one to shy away from hard work paired with the kindest of hearts made the suggestion that same day. We agreed to pose the idea to Keir since we felt he should begin to shoulder some of the work that would be involved in making this work for the long term. To Keir's credit he gave it careful thought before agreeing we should bring Smiley into the fold.

First order of business,...change the name. Deb Niose, who works for the Warwick Shelter and is one of the kindest people I know, had given this poor creature the handle "Smiley" for the odd "smile" he made baring his teeth when he felt threatened. Cute, but not for us. There was a problem however, he'd heard that name for several weeks and had begun to respond to it. We brainstormed for something similar that we thought would suit his diminutive British frame. He seemed like a "Buster" to me, I also liked "Hagar" remembering the old comic strip "Hagar the Horrible", the titular character sharing a beard very similar in appearance to our little guy. Finally, and I honestly can't recall who came up with it first, we arrived at "Miles". A name only one dog owner I'd worked with, Kirsten, Nick and their Standard Poodle of the same name. had ever used. It had an aristocratic flavor to it that was appropriately tongue in cheek for this little guy (not your "Miles" Kirsten, he is an aristocrat!) It sounded enough like "Smiley" that we thought it would be easier for him to adapt to so, "Miles" as he's now known, is officially a member of our family. There's a lot of work to be done; the food guarding appears so far to have dissipated, though we remain watchful and cautious. Acclimating him to the other dogs is a slow deliberate process of controlled exposure. The opposite of "Familiarity breeds Contempt" thought process. He goes on daily walks with Louie. Archie, who's activity level is pragmatic at best having lost so much of his eyesight as well as having restricted exposure to sunlight (a side effect of the drug treatment) has become aware of Miles' presence through a baby gate as well as from the other side of a crate. The process will expand to other avenues as seems appropriate, patience and diligence being the main ingredients as well as fodder for future posts. For now, we once again grateful to the Warwick Shelter for the gift of another great dog.
Posted by Great Dog Blogger at 9:09 AM No comments: