“Tips for the Dog Park”

The City of Warwick allotted funds in 2005 for the designation of a fenced dog area at City Park. Thank you Mayor Avedesian, it's been an incredibly popular venue with an additional area added for smaller dogs. The Town of Barrington, RI followed with it's own designated area at Haine's Park. With the passing of Ballot Question 2 in this years election perhaps we'll see more of them. 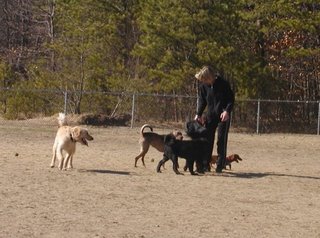 Dog parks are a great place for dog owners to observe the behavioral traits of their and other people’s dogs. I’ve been walking my dogs at City Park for several years. On a number of occasions I've observed people with their dogs walk nervously by other people with their dogs. You can only imagine what terrible scenarios their owner’s imagine might occur. Of course aggressive exchanges between dogs can and do happen so this sensation of impending doom is understandable, unfortunately owners tend to make mistakes like bunching up on the leash or changing the tone of their voice in a way that says to their dog, “Oh, boy, this might get ugly!” I can only imagine what a pleasant surprise it must be when they happen upon a dog park and all the dogs aren’t killing each other but playing instead. Of course having the freedom to move without the restriction of a leash dials back the tension levels considerably so aggressive behavior is far less likely to occur. That said, you’ve got to wonder if many dog owner’s first foray into the dog park isn't a little traumatic. Far more often than not their concerns are eventually appeased as their dog begins to greet and play with the other dogs. I enjoy watching dogs sort each other out. Dogs communicate so much to each other through body language and vocalization, it’s great fun watching the exchanges that unfold.

There are a handful of fundamentally important facts I enter the dog park with however. First, there is nearly always an element of aggression in dog play. Growling, barking and the baring of teeth are not unusual within the context of play. Second, if there is an aggressive exchange between two or more dogs it’s more likely to be a lot of pomp and circumstance (Think yelling and screaming) as opposed to them actually injuring each other. Dog’s have an innate sense of conflict avoidance, I believe this is vestigial and often refer to this type of behavior in that fashion. If they can impress upon an adversary that they should be left alone with a dramatic display as opposed to an actual exchange that includes biting, they are more likely to emerge from that situation uninjured; seems sensible right? Third, if they are injuring each other it will more than likely be over before you can do very much to prevent it. Your average dog can deliver five bites per second. If you’re getting the impression that a visit to the dog park should come with a measure of pragmatism I’d say you’re right. One of my three dogs, Reno, came from the Warwick Shelter with dog aggression issues. Training and conditioning that continues to this day, have yielded a dog that’s able to cope with dogs other than the two he lives with. I would not let him loose in a dog park. It’s just not reasonable to expect other dog owners to understand his dominant displays are not likely to lead to injury. There’s also no way to be certain that they wouldn’t! No one can be absolutely certain that other dog owners have asked themselves whether their dogs will behave well with other dogs and their human counterparts. Equally true is that no dog owner can say with absolute certainty that their dog is not capable of aggressive behavior. So what can you do as the human part of the dog park equation to keep the tension down and the atmosphere of fun up? Here are a few things I do. When I first posted this entry I suggested bringing treats into the dog park environment to establish a positive association. With the benefit of hindsight, that turns out not to be such a good idea. Many dogs gravitate to and frequently jump on the one or two people who do bring treats in. This can lead to injury and certainly creates tension which is not the objective here at all. Instead, think about using the space more effectively. With City Park as an example, the large dog area is 3/4 of an acre, the small dog area is roughly 2/3 of an acre. Both areas start with a small rectangular "lock", essentially a two stage entry into the larger areas. This is where problems can occur. If the larger area provides enough space for dogs to avoid conflict by walking (or running) away from it, the smaller is a potential powder keg. Enter only when it's empty. If someone else is coming in or out of it, wait for it to clear. Don't open the second gate until the one behind you is shut. Unleash your dog only after you've walked into the large area and do it quickly. Walk directly to the back of the area. Languishing near the entrance effectively abbreviates the park for your dog who will be inclined to stay near you. This is also where most of the other dogs are going to be and that's a recipe for stress. Walking to the back of the park opens it up and relieves the initial stress that comes when all the dogs already in the park want to see who the new dog is. Hang back and observe how frequently and how far your dog ventures away from you to mix it up with the other dogs. I do this to determine comfort level. Also observe when your dog looks back to make sure you're still there. I like to praise for this "Good Puppy", it lets them know I'm not stressed and will sometimes lead to a recall. If your dog responds to verbal praise by returning to you make sure to step up with vigorous physical praise as well.

What other behaviors should you be looking for when your dog’s at the dog park? Praise your dog for playing well with other dogs, praise your dog any time they’re near another person but not jumping on them; even chronic jumpers are going to miss an opportunity once in a while and when they do, accentuate the positive, let them know you noticed, “Good Dog!”, if you're close enough throw in a scratch on the tush. That'll begin to form the foundation of good, and from your dog’s point of view, rewarding behavior. What if your dog appears to be getting stressed out? One overly assertive pup is spoiling the fun. Call it a day before things get ugly but end on a positive note. If you’ve been careful to reward desirable behavior like eye contact and recalls with praise, then your dog is going to begin to recall more reliably. Call your dogs name, when they look, praise, when they come in, praise, leash say goodbye and try it again tomorrow. 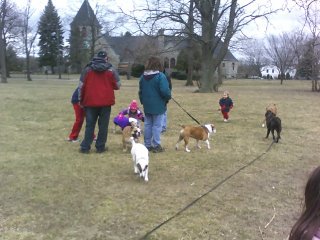 In other parts of the country dog parks are fairly common, I’m confident you'll be seeing more of them in and around Rhode Island too, particularly as places like City Park begin to illustrate that they're not the risky proposition some thought they might be. The art of conversation, which has lost so much ground to modern distractions, is alive and well at City Park and places like it. "What sort of dog is that?" "What do you feed her?" "Who’s your vet?" "Hey, you know our dogs seem to like each other, what are you doing for dinner?" You get the picture. It’s great stuff. Civil discourse is part of this picture as well. Aggressive dogs, small children and food are best left outside the park but on occasion, find their way in. "Excuse me, your daughter doesn't look more than three years old. She could easily be injured in here" The presence of children in particular is both common and as the father of a 6 year old, disturbingly irresponsible and lacking common sense. Speak up! The accused may be belligerent at first but they're not likely to come back making the same mistake.